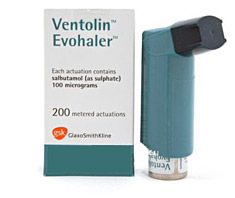 Ventolin Inhaler is a broncholytic drug which provides a short but very fast action during bronchospasm. It has Salbutamol that acts on beta-receptors of the smooth muscles of the bronchi, reduces a resistance in bronchi and provides an anti-inflammatory effect.

The action of Ventolin Inhaler starts in 3-5 minutes after the inhalation and lasts for up to 6 hours. The medication will not do as a background therapy of the bronchial asthma, however it is an irreplaceable product during the spasm of the bronchi muscles. Besides the bronchodilatory action, Salbutamol has a wide range of other effects:
- An increase of the vital volume of the lungs
- A dilation of the coronary arteries
- A stimulation of the mucus secretion

Ventolin Inhaler does not act on the work of the cardiovascular system during the use of the therapeutic doses.

Ventolin Inhaler is taken during the bronchospasm, or during the development of the initiating agents (interaction with cigarette smoke, pollen, dust, or before the physical activity).

Ventolin is released in the form of the metered aerosol. One pressing – one therapeutic dose.
- To reduce bronchospasm in adults and children regardless of age, it is necessary to have 1-2 inhalations of Ventolin Inhaler.
- The drug may be used not more than 4 times per day
- To prevent bronchospasm, it is necessary to have 1 inhalation 15 minutes before the appearance of the initiating agents.

- An overdose may cause asphyxia and a severe bronchospasm, and that is why do not take the drug more than needed.
- Patients with a severe type of arrhythmia should use Ventolin with care, after cardiologist’s consultation.