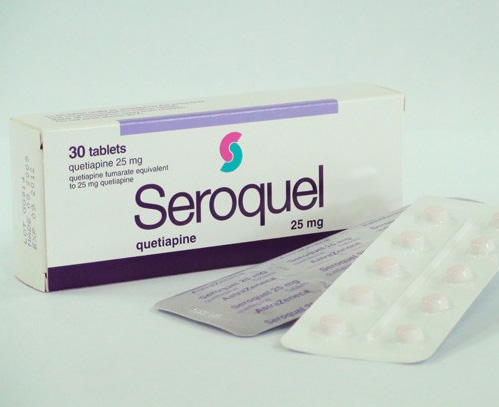 The use of Quetiapine (Seroquel) is preferred in the treatment of schizophrenia nowadays. It is indicated to reduce hallucinations and delusion in people suffering from schizophrenia or bipolar disorder.
A softer pattern of the side effects and an increased index of the pharmacological safety have become an advantage of this drug before the antipsychotic agents developed in 50ies of the XX century.

Seroquel is a trade name of Quetiapine. This ingredient belongs to a new medical group of the neuroleptic agents. The medications of this group differ from the antipsychotic agents because they less interact with dopamine receptors. Due to this, a risk of the side effects drops.
The drug shows a rather high activity as to the serotonin receptors. It provides an intensive influence on the negative symptoms during schizophrenia. A psychoemotional state of a patient is stabilized for a long period. It means that it is not just a medication to reduce the disease symptoms but it also controls the pathology within the period of the drug administration.

There is clinical data that Seroquel may be used for insomnia induced by the anxiety, and panic attacks. The drug in small doses provides a strong sedative action and favors a faster falling asleep.
But the administration of the drug as a sleeping aid is not normal because the drug provides the antipsychotic action besides the sedative effect. Due to this, changes may happen in the serotonin structures of the brain.

Recommendations for the use of Seroquel

As Quetiapine is applied during the different mental disorders, it is good to select an individual dose for each clinical case. It is better to take Seroquel as a monotherapy. In case of the use of two or more medications at the same time, consult an experienced doctor.
A standard instruction includes the basic recommendations for the use of Seroquel.

A slow increase of the daily dose gives a possibility to better get used to the action of Quetiapine and reduce a risk of the side effects. Moreover, you will easily know how the body reacts to this ingredient.

Starting from the 5th day, the dose is individual. It is believed that 450 mg to 600 mg Seroquel per day is taken during schizophrenia and psychosis. In case of the chronic bipolar disorders, the dose also does not exceed 600 mg. But if the maniac phase is aggravated, the dose is increased up to 750-800 mg per day. It all depends on:
- Patient’s age;
- Total body mass;
- Functioning of the kidneys, liver and basic activity systems;
- Concomitant psychological diseases.

For instance, old patients at the age of over 60 should start the treatment from the dose of 25 mg per day. The dose may be increased by 25-50 mg. Due to the low metabolism, Quetiapine is slowly excreted from the body. Due to this, a total daily dose should be by 30-50% lower than it is indicated in the instruction.

There is a rather big list of the restrictions during the use of Seroquel. Mainly, it is related to the possible medical interaction. The drug should not be taken with:
- Medications inhibiting the central nervous system (including ethanol);
- Medications interacting with CYP3A4 enzyme;
- Tricyclic antidepressants;
- Strong hypotensive products.

Pregnant women and people under 18 are prohibited to take Seroquel.

A high safety index broadens the borders of the use of Seroquel. However, bear in mind that it is a strong antipsychotic drug and it also may induce side effects. Patients often notice the symptoms within the first two weeks of the treatment. These are:
- Sleepiness;
- Dizziness;
- Drop in blood pressure;
- Dyspepsia;
- Thirst.